So, exactly how dangerous are the natural disasters that face Hawaii?  I have heard from several visitors to the island that they would love to live here but the hurricanes, volcanoes, and tsunamis scare them.  So, lets separate the fact from the myths in regard to natural disasters in Hawaii starting with Maui’s Hurricane Season.

This year (2015) has been one of the most active Pacific Hurricane Seasons in recorded history.  At one point we actually had three category 4 hurricanes in active in the Pacific at the same time.  But how often do these hurricanes affect Maui?  To be perfectly blunt… not often at all. 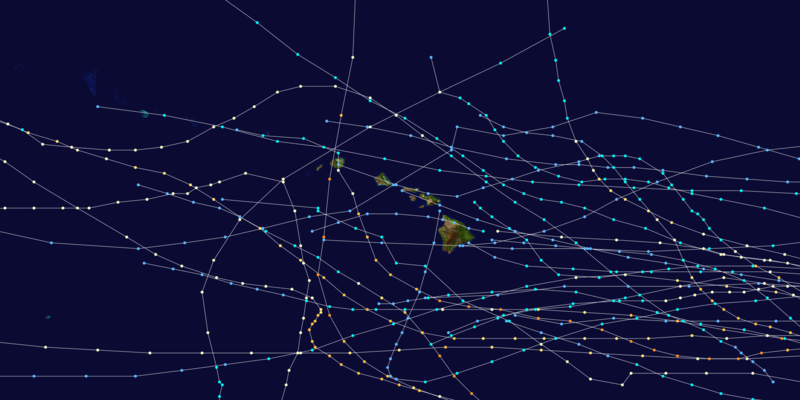 A map of historical hurricane tracks that have affected Hawaii since 1949.

I should qualify this by saying that I am not a meteorologist but from what I have gathered Maui in particular is pretty well protected from direct hurricane hits.  Of course, a person should always be prepared as a hurricane approaches.  I always make sure I have a weeks worth of fresh water and non perishable foods on hand.  But the good news is that we usually have plenty of warning when a hurricane is approaching.  Most hurricanes travel at a speed of around 10 miles per hour and our weather forecasters do a great job of keeping us informed as to the path of storms.  If a storm is about to hit, we usually have a couple days notice to prepare.  So far, the most damaging storms have hit landfall first on Kauai and the Big Island which are located as bookends of the Hawaiian Island chain.  Maui seems to be safely nestled in-between these two outpost islands.

Some people will argue that Hawaii is protected by certain climate features (water temperature, wind shear, and even the mountains on the Big Island) protecting us from direct hits.  Others will claim that it is the Hawaiian Goddess of Pele watching over us.  Whatever it might be, Maui residents are cautiously thankful.  We remain aware of the threats but it usually adds up to just another day in Paradise.

Honua Kai is the Top Ranked Individually owned Resort in Hawaii
May 12, 2019